Lasers are everywhere nowadays: doctors use them to correct eyesight, cashiers to scan your groceries, and quantum scientist to control qubits in the future quantum computer. For most applications, the current bulky, energy inefficient lasers are fine, but quantum scientist work at extremely low temperatures and on very small scales. For over 40 years, they have been searching for efficient and precise microwave lasers that will not disturb the very cold environment in which quantum technology works. A team of researchers led by Leo Kouwenhoven at TU Delft has demonstrated an on-chip microwave laser based on a fundamental property of superconductivity, the ac Josephson effect. They embedded a small section of an interrupted superconductor, a Josephson junction, in a carefully engineered on-chip cavity. Such a device opens the door to many applications in which microwave radiation with minimal dissipation is key, for example in controlling qubits in a scalable quantum computer. The scientists have published their work in Science on the 3rd of March.

Lasers
Lasers have the unique ability to emit perfectly synchronized, coherent light. This means that the linewidth (corresponding to the color) is very narrow. Typically lasers are made from a large number of emitters (atoms, molecules, or semiconducting carriers) inside a cavity. These conventional lasers are often inefficient, and dissipate a lot of heat while lasing. This makes them difficult to operate in cryogenic environments, such as what is required for operating a quantum computer.

Superconducting Josephson junction
In 1911, the Dutch physicist Heike Kamerlingh Onnes discovered that some materials transition to a superconducting state at very low temperatures, allowing electrical current to flow without any loss of energy. One of the most important applications of superconductivity is the Josephson effect: if a very short barrier interrupts a piece of superconductor, the electrical carriers tunnel through this non-superconducting material by the laws of quantum mechanics. Moreover, they do so at a very characteristic frequency, which can be varied by an externally applied DC voltage. The Josephson junction is therefore a perfect voltage to light (frequency) converter. 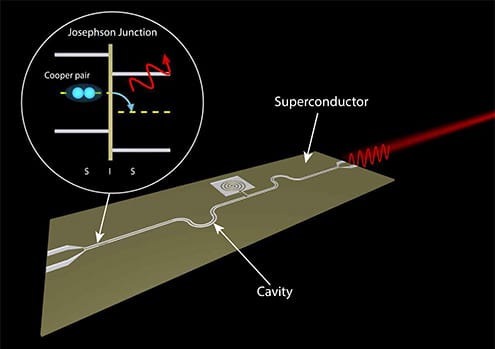 Researchers at QuTech have built an on-chip microwave laser based on a fundamental aspect of superconductivity, the AC Josephson effect. The device is made from a single nanoscale Josephson junction strongly coupled to a superconducting cavity. When a small DC voltage is applied across the junction by a battery, the difference in energy causes microwaves to be released when a Cooper pair tunnels across the junction. The cavity then provides amplification, resulting in a beam of coherent microwave light to be emitted from the cavity. The device may have applications in building a scalable quantum computer.

TechGirl of the Month

Our Outreach Coordinator is nominated for “TechGirl’ of the month! Techgirl.nl offers a platform for women working in the ...
Read more