This page is an overview of the research highlight conducted in our group:

This work achieves a world’s first in quantum internet technology by developing a so-called link layer protocol for quantum networks. The protocol allows for reliable transmission of quantum bits or or ‘qubits’, despite large transmission and memory noise in the underlying hardware. This brings the phenomenon of ‘quantum entanglement’ from a physics experiment towards a real world quantum network. It marks a significant development towards the realization of a quantum internet, delivering applications that are impossible to achieve using a ‘classical’ internet.

In the ‘classical’ internet, a collection of software layers referred to as the ‘network stack’ allows computers to communicate with each other. Underlying the network stack are communication protocols, such as the Internet Protocol (IP) or the HTTP protocol. One essential protocol used by a network is the ‘link layer’ protocol, which overcomes the problems caused by imperfect hardware. It allows for reliable transmission of data over an unreliable communication link. An example of a link layer protocol is Wi-Fi, which allows an unreliable radio signal – suffering from interruptions and interference – to be used to transmit data reliably between compatible devices.

A quantum network, based on transmission of qubits, requires the same level of reliability. To achieve this, this work proposes a ‘quantum network stack’ and constructs the world’s first link layer protocol for a quantum network. This link layer protocol allows reliable generation of entanglement between two network nodes connected by a direct physical link, such as a telecom fiber. The next step towards the development of a quantum internet is to produce entanglement between network nodes which are not connected directly by a fiber, using the help of an intermediary node. In order to realize large scale quantum networks, it is important to go beyond a physics experiment, and move towards building a quantum network system. This is one of the objectives EU-funded Quantum Internet Alliance (QIA). 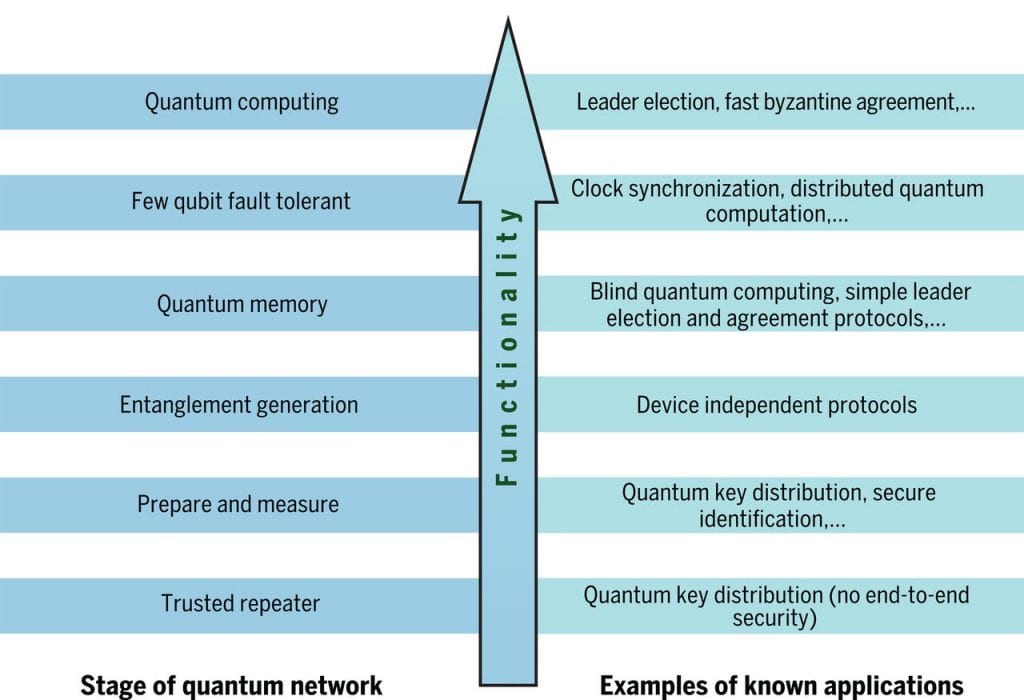 A quantum internet may very well be the first quantum information technology to become reality. We published a comprehensive guide towards this goal in Science. It describes six phases, starting with simple networks of qubits that could already enable secure quantum communications – a phase that could be reality in the near future. The development ends with networks of fully quantum-connected quantum computers. In each phase, new applications become available such as extremely accurate clock synchronization or integrating different telescopes on Earth in one virtual ‘supertelescope’. This work creates a common language that unites the highly interdisciplinary field of quantum networking towards achieving the dream of a world-wide quantum internet.

Quantum bits are highly delicate and must be protected against noise and imperfections to realize a large scale quantum internet and a quantum computer. Our team has now devised a novel method with which the quality of quantum memories, error correction schemes and quantum repeaters to store and send quantum bits can be certified. The quality of these operations on quantum information is captured by its so-called quantum capacity.

In this work, we propose the first method to directly estimate this capacity for storing quantum information, even if the noise is arbitrarily correlated. The estimation protocol only needs single qubit operations and measurements, and does not require a quantum error correction scheme to be implemented in order to test the quantum memory.

In 1935, Einstein asked a profound question about our understanding of Nature: are objects only influenced by their nearby environment? Or could, as predicted by quantum theory, looking at one object sometimes instantaneously affect another far-away object? We tried to answer that question, by performing a loophole-free Bell test.