Back to Quantum Internet and Networked Computing

The Quantum Internet Is Emerging, One Experiment at a Time.

Institute of Quantum Science and Technology, University of Calgary 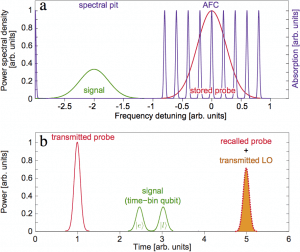 A macroscopic probe pulse is stored in an AFC.

Non-destructive detection of photonic qubits is an enabling technology for quantum information processing and quantum communication. Together with members of Prof. Simon’s group, we proposed an approach to non-destructive photonic qubit detection that promises to have all the mentioned features. Using a thulium-doped waveguide in LiNbO3, we furthermore performed a proof-of-principle experiment with macroscopic signal pulses, demonstrating the expected cross-phase modulation as well as the ability to preserve the coherence between temporal modes.

Entanglement between more than two hundred macroscopic atomic ensembles in a solid, Oct 3, 2017. 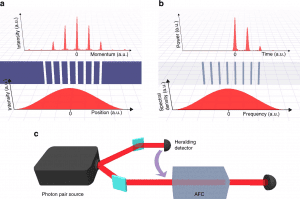 Principle of our approach. Our approach is based on the analogy between re-emission of a photon from an atomic frequency comb and multi-slit diffraction.

The question whether quantum superposition and entanglement can exist in macroscopic systems has been at the heart of foundational debates since the beginnings of quantum theory. Together with the theory group of Prof. Simon as well as researchers from NIST and JPL, we have demonstrated entanglement between over two hundred atomic ensembles, each containing a billion atoms. We also showed that each individual ensemble contains further entanglement. 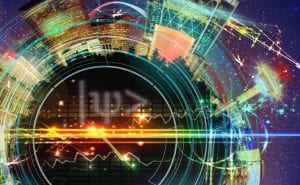 If a photon interacts with a member of an entangled photon pair via a Bell-state measurement, its state is teleported over principally arbitrary distances onto the pair’s second member. Since 1997, this puzzling prediction of quantum mechanics has been demonstrated many times. However, with two exceptions, only the photon that received the teleported state, if any, traveled far, while the photons partaking in the BSM were always measured close to where they were created. Using the Calgary fibre network, we demonstrated quantum teleportation from a telecom photon, interacting with another telecom photon after both have traveled several kilometres, onto a photon at 795 nm wavelength. This establishes an important requirement for quantum repeater-based communications and, ultimately, a global quantum internet.

Professor Tittel talks at TEDxYYC about quantum teleportation and the need for moon-shot projects in science. 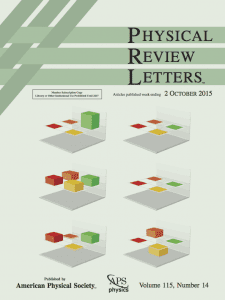 Polarization-encoded photons at telecommunication wavelengths are compelling for practical realizations of photonic quantum information processing due to the ease of performing single qubit manipulations, the availability of polarization-entangled photon-pair sources, and the possibility of leveraging existing fiber-optic links for distributing qubits over long distances. We recently reported the first experimental demonstration of a quantum memory for such photons – a cryogenically-cooled, Erbium-doped optical fibre. Our investigation was picked for “Editor’s suggestion” and selected for the cover page of the October 2, 2015 issue of Physical Review Letters. 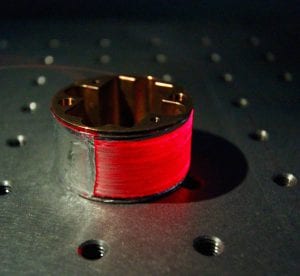 The future quantum Internet requires distant users to process, store and distribute quantum information encoded into photons. A longstanding problem has been to develop an atomic quantum memory for photons that is compatible with the wavelength of light employed in existing – and thus readily available – fibre-optic networks, as well as to implement atom-based quantum memories in standard fibre-optic cable, which can be very long and as thin as a human hair. In our recent study, we show that these obstacles can be overcome. Our group has demonstrated that 1532 nm wavelength photons, which are entangled with photons at 795 nm wavelength, can be faithfully stored in, and retrieved from, a commercially available erbium-doped optical fibre. 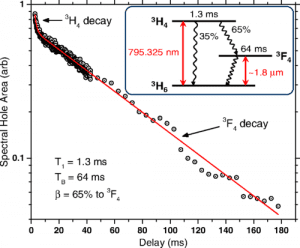 We have measured the coherence time of the 795 nm-transition of thulium ions in a garnet, which determines how long this material can store photons, to be of nearly five-hundred microseconds – longer than in any other thulium-doped crystal. This unique characteristic, along with many others that we discovered in this material, will allow utilizing this crystal as an optical quantum memory for light – a device that stores information encoded into photons – in future quantum repeaters, which promise quantum communication beyond its current distance barrier of around 200 km. Being at the crossroads between material science and quantum communication, our discovery lays the groundwork for the near-future development of quantum applications based on the interaction between light and atoms.

Quantum key distribution (QKD) promises information-theoretic secure distribution of encryption keys. Yet, several vulnerabilities of single-photon detectors have recently been exploited to compromise the security of QKD systems. We report the first proof-of-principle implementation of a new quantum-key-distribution protocol that is immune to any such attack. More precisely, we demonstrated this new approach to QKD in the laboratory over more than 80 km of spooled fiber, as well as across different locations within the city of Calgary. The robustness of our fiber-based implementation, together with the enhanced level of security offered by the protocol, confirms QKD as a realistic technology for safeguarding secrets in transmission. Furthermore, our demonstration establishes the feasibility of controlled two-photon interference in a real-world environment and thereby removes a remaining obstacle to realizing future applications of quantum communication, such as quantum repeaters and, more generally, quantum networks.

Interference of photons after storage in quantum memories, Mar 6, 2015.

we report the interference of two photons recalled from separate solid-state quantum memories. Using pairs of laser pulses at the single-photon level, we demonstrate two-photon interference and Bell-state measurements after either none, one, or both pulses have been reversibly mapped to separate thulium-doped lithium niobate waveguides. As the interference is always near the theoretical maximum, we conclude that our solid-state quantum memories, in addition to faithfully mapping quantum information, also preserve the entire photonic wavefunction. This makes our memories generally suitable for future applications of quantum information processing that require two-photon interference, including for quantum repeaters and quantum networks.

An experimental test of all theories with predictive power beyond quantum theory, Mar 5, 2015.

Randomness in quantum theory is one of its key features and is widely known, even outside the scientific community. Its appeal is its fundamental nature and broad range of implications: knowing the precise configuration of the universe at the big bang would not be sufficient to predict its entire evolution, for example, in contrast to classical theory.
In our experiment we tackle the question whether or not there can be a theory that improves the predictions made by quantum mechanics using a novel and fully general approach. We show that any theory in which there is less randomness is destined to fail: no (known or yet-to-be-discovered) theory can improve significantly upon predictions made by quantum theory, and quantum theory, despite being probabilistic, is essentially optimal with respect to its predictive power. In other words, not only does God “play dice”, but his dice are fair.

The reversible transfer of quantum states of light into and out of matter constitutes an important building block for future applications of quantum communication: it will allow the synchronization of quantum information, and the construction of quantum repeaters and quantum networks. Much effort has been devoted to the development of such quantum memories, the key property of which is the preservation of entanglement during storage. Here we report the reversible transfer of photon–photon entanglement into entanglement between a photon and a collective atomic excitation in a solid-state device. Towards this end, we employ a thulium-doped lithium niobate waveguide in conjunction with a photon-echo quantum memory protocol, and increase the spectral acceptance from the current maximum of 100 megahertz to 5 gigahertz. We assess the entanglement-preserving nature of our storage device through Bell inequality violations and by comparing the amount of entanglement contained in the detected photon pairs before and after the reversible transfer. These measurements show, within statistical error, a perfect mapping process. Our broadband quantum memory complements the family of robust, integrated lithium niobate devices. It simplifies frequency-matching of light with matter interfaces in advanced applications of quantum communication, bringing fully quantum-enabled networks a step closer.

Quantum memory is essential for the development of many devices in quantum information processing, including a synchronization tool that matches various processes within a quantum computer, an identity quantum gate that leaves any state unchanged, and a mechanism to convert heralded photons to on-demand photons. In addition to quantum computing, quantum memory will be instrumental for implementing long-distance quantum communication using quantum repeaters. The importance of this basic quantum gate is exemplified by the multitude of optical quantum memory mechanisms being studied, such as optical delay lines, cavities and electromagnetically induced transparency, as well as schemes that rely on photon echoes and the off-resonant Faraday interaction. In this article, we review state-of-the-art developments in the field of optical quantum memory, establish criteria for successful quantum memory and detail current performance levels.

Coin flipping is a cryptographic primitive in which two distrustful parties wish to generate a random bit to choose between two alternatives. This task is impossible to realize when it relies solely on the asynchronous exchange of classical bits: one dishonest player has complete control over the final outcome. It is only when coin flipping is supplemented with quantum communication that this problem can be alleviated, although partial bias remains. Unfortunately, practical systems are subject to loss of quantum data, which allows a cheater to force a bias that is complete or arbitrarily close to complete in all previous protocols and implementations. In this paper, we report on the first experimental demonstration of a quantum coin-flipping protocol for which loss cannot be exploited to cheat better. By eliminating the problem of loss, which is unavoidable in any realistic setting, quantum coin flipping takes a significant step towards real-world applications of quantum communication.